Welcome to BiblioBlast, the newsletter of the D. Samuel Gottesman Library of the Albert Einstein College of Medicine. BiblioBlast will inform you about new Library resources and keep you up to date with our classes, events and other activities. It will also highlight tips to make our online resources easier and faster to use.

Contact the Reference Department for more information, or to schedule an individual or small-group session.

See our full listing of events.

Collaboration in 3D at the Library 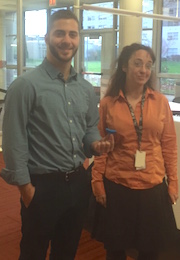 Rudy approached King regarding the availability of a 3D scanner. King has been beta-testing a Makerbot 3D scanner as a possible addition to the Library’s 3D printing service. Rudy’s request provided a unique opportunity for a real world test of the scanner. Working together, they scanned the anchor from several angles, and used the Makerbot scanning software to integrate the scans to form a useable digital representation of the piece. The piece was then printed on the Library’s Makerbot printer.

The top of the anchor was later coated with rubber spray to make it more adhesive. The headrest was then reassembled by Einstein engineering staff.

According to Rudy, the circulating nurse used the piece to prop up Jadon’s head once the twins were separated, so that the surgeons could focus on recreating his skull and scalp.

We’re looking forward to more collaborations like this in the future. For more information on our 3D printing service, see our guide.

The Library has increased its collection of JoVE sections. We will have a year’s trial to three new sections: JoVE Genetics, JoVE Cancer Research, and JoVE Biochemistry. We continue, as previously, to have access to JoVE Behavior, JoVE Developmental Biology and JoVE Basic Methods in Cellular and Molecular Biology.

The Library will host a new traveling exhibition from the National Library of Medicine entitled Pick Your Poison: Intoxicating Pleasures and Medical Prescriptions.

Mind-altering drugs have been used throughout the history of America. While some remain socially acceptable, others are outlawed because of their toxic, and intoxicating, characteristics. These classifications have shifted at different times in history and will continue to change. The six-banner display explores the factors that have shaped the changing definitions of some of our most potent drugs, from medical miracle to social menace.

This exhibition was produced by the National Library of Medicine and the Smithsonian’s National Museum of American History. It will be on display in the library from December 12, 2016, to January 21, 2017.

Read more about the exhibit.

The library has a subscription to F1000, a provider of services to biomedical researchers to support the discovery, writing and publication of new scientific findings.

F1000Prime identifies and recommends important articles in biology and medical research publications. Articles are selected by a peer-nominated global 'Faculty' of the world's leading scientists and clinicians who then rate them and explain their importance.

F1000Workspace is a citation and article manager that allows for easy collaboration on projects.

Health Equity Matters is a quarterly electronic newsletter intended to promote awareness of minority health and health equity work at CDC and in the broader public health community, support the elimination of health disparities, improve women’s health, support diversity and inclusion in the public health workforce and foster ongoing communication and collaboration with the public. Sign up to receive the newsletter.

Join the Book Club at our first meeting of the year, on January 11, to usher in our theme for the year, global health. We will discuss Crazy Like Us: The Globalization of the American Psyche, by Ethan Watters, which “illustrate[s] how distinctly American psychological disorders have played in far-off locales, and how Western treatments, from experimental, unproven drugs to talk therapy, have clashed with local customs, understandings and religions.” [Publishers Weekly]

The Book Club’s following meeting will take place on March 8, International Women’s Day, and, appropriately, we will discuss Half the Sky: Turning Oppression into Opportunity for Women Worldwide, by Nicholas D. Kristof and Sheryl WuDunn.